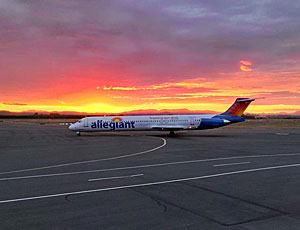 Allegiant Airlines, which operates hubs in Des Moines, Cedar Rapids and the Quad Cities, is continuing flight cancellations after grounding their entire fleet of MD-80 aircraft for safety checks. Last Thursday, the Las Vegas-based airline grounded 49 MD-80 aircraft after realizing the fleet’s emergency exit slides were not in compliance with safety recommendations.

Travelers faced delays and rescheduled flights throughout the weekend. Allegiant spokesperson Brian Davis, in a conference call Monday afternoon, said about 5,700 travelers with canceled flights were able to reschedule. “In addition to Allegiant’s own fleet, we’ve made use of sub-service aircraft throughout the last couple days,” Davis said. “Customers check in at the Allegiant ticket counter and have an Allegiant boarding pass, but board an aircraft with another aircraft’s livery that’s operated by another carrier.”

As of Monday afternoon, 29 of the 49 planes taken out of service for safety checks had been returned to service. Davis said just over 10-percent of Allegiant’s passengers in the last four days required a rescheduled flight on a following day. Allegiant Air officials expect the rest of the airline’s planes to be returned to service by the end of the month.