You are here: Home / News / British choreographer to debut new twist to Sleeping Beauty in Iowa 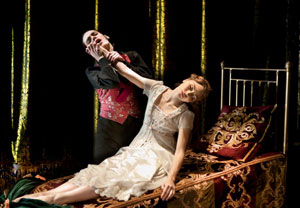 A British choreographer who’s been called one of the greatest storytellers of our time is in central Iowa this week for the North American debut of his new version of a classic fairy tale.

Bourne updated elements of the familiar story, like cursing the heroine to sleep for 100 years, awakening in the modern day of computers and cell phones. Also, he’s created what he calls a “supernatural love story” of good versus evil.

“This stranger kissing her and falling in love at first sight really wasn’t a great love story,” Bourne says. “I’ve got a story now where she has a young, childhood sweetheart who’s possibly unsuitable for her. He’s a gardener in the palace grounds.”

Bourne adds other twists and turns in his revamped tale. “When the curse happens and she has to sleep for the 100 years, he has this dilemma of how can he be there when she wakes up,” Bourne says. “It’s very romantic really and it throws up lots of interesting plot ideas about how he can get the gift of eternal life.”

The original story was published in the late 1600s, but most of us know the epic of “Sleeping Beauty” from Disney’s 1959 animated film. Modern American TV shows, like “Once Upon a Time” and “Grimm,” are also drawing wide audiences by juxtaposing the centuries-old fairy tales with 21st century technology and by adding new characters to the mix — as Bourne has also done.

Anything that looks at fairy tales in a new way is very appealing to people because it’s something that we all feel we know something of already,” Bourne says. “So, for a wordless piece like mine, it’s actually very helpful to have that story that people have in their heads. Then, you can play with it a little bit. I think that’s why people enjoy these reinterpretations of the classic stories.”

One thing Bourne hasn’t changed is the music — of Tchaikovsky. The curtain rises Friday and Saturday for three shows at the Des Moines Civic Center, starting a seven-city North American tour to other cities, including New York, Washington D.C. and Los Angeles.