You are here: Home / Sports / Iowa feeling better heading to Minnesota after win 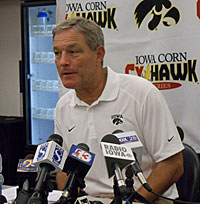 Iowa coach Kirk Ferentz admits his team has a much better feeling about itself than just a few weeks ago. After opening the season with a loss to Northern Illinois and an unimpressive win over Missouri State the Hawkeyes have made progress in the past two games. They take a 3-1 record into their Big Ten opener at Minnesota. “No matter what happens, you play 12 games and you’ve just got to flip the page and go,” Ferentz says. He says it’s always more fun to move on Sunday when you’ve had a win.

Iowa is far from a Big Ten contender right now but with the way Michigan has struggled the past couple of weeks the Legends Division race looks more wide open now than it did prior to the season. “That’s just the thing about college football, we talked about that a couple of weeks ago, every game is so important because you only get 12 cracks,” Ferentz says.

Ferentz says Minnesota has made a lot of progress under third year coach Jerry Kill and says that’s evident when you look at the film from three years ago. Ferentz says the Gophers are much better up front on both sides of the ball. “They just look stronger and more physical. They were playing young guys a couple of years ago, ” he says.

Ferentz says Minnesota identified guys they thought had potential a few years ago and are now reaping the benefits. Ferentz says the offensive and defensive lines for the Hawks face their toughest challenge of the season to date. Iowa has dropped its first two trips to TCF Bank Stadium. “Part of that is credit to them, but part of that blame lands out our feet too. If we play like we played the last two times, we are not going to win that game,” Ferentz says.

Kill says it’s been their nature to be physical and run the ball and they need to continue to get bigger and stronger to have success. Kill says that physical style will get a big test against the Hawkeyes. “They physically whipped our butt a year ago, and if you look at an Iowa team the highest compliment you can get is…technically they are as good as anybody in college football,” Kill says.