You are here: Home / Sports / Farley has high praise for McNeese State 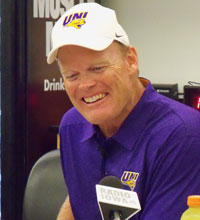 It’ll be a Top Ten match-up inside the UNI-Dome on Saturday afternoon as #5 UNI hosts 9th ranked McNeese State. Panther coach Mark Farley says he’d put the Cowboys up against just about any college football team in the country. “This is as good a team that I’ve seen in FCS in a long time. This team can go on the road and win anywhere, they can beat anybody on the right day….they are really good, I’m not even making that up. It ought to be a fun game, we’ll just see what happens. We’ve just got to put a good plan together,” Farley says.

Farley says that games that pit Top 10 teams against each other create excitement for both players and fans. He says fans have higher expectations in what these types of games should feel like and players are the same way.  He says it boils down to the players just having to perform and be locked in once the game starts.

Farley says that what makes McNeese so dangerous is their ability to score points in a hurry. “They’ve got great talent, they’ve got a runningback that can score anytime he touches the ball, and they’ve got a very aggressive defense that can blow it open at any time,” Farley says. He says they will go along and control the game on offense, and then all of a sudden the defense forces turnovers that lead to quick scores.

Saturday’s game is scheduled for a 4:00 kickoff inside the UNI-Dome.