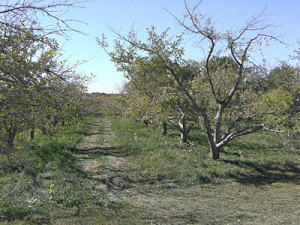 An apple orchard near Lacona.

While most of Iowa’s apple crop was wiped out in a bitter cold snap last fall, this year’s bounty of big, juicy red and yellow apples is turning out beautifully. State horticulturist Mike Bevins says given the dry summer, the apples are ripening a bit early this season and
the crop is looking tremendous as the harvest gets underway.

“Last year’s crop was lost to a late freeze so the apple trees rebounded this year and have produced a great many apples,” Bevins says. “Growers had to thin apples this year to get some good-sized apples and put supports on branches to keep the branches from breaking, so it’s a tree-buster of a crop.”While some fruits, like grapes, will produce more flavorful varieties when they “suffer” during harsh weather, he says most of Iowa’s 100-plus commercial apple orchards report weathering this summer’s drought very well.

“A lot of apple trees are typically better in alternate years, so with last year’s crop lost, it’s a much better crop this year,” Bevins says. “We had  adequate moisture this spring and the cool nights right now are really coloring up the apples so it’s time to pick apples.” While there are hundreds of types of apples, they fall into essentially two categories — those for eating fresh and those used in baking pies, apple sauces, apple butters and other homemade delicacies.

“Apple orchards in Iowa have a mix but what you’re going to find ripening now are probably the pie apples, the ones that keep well,” Bevins says. “The fresh, eating apples probably ripened a little earlier this year so now is the time to get some good apples for pies and apples that will store for a while.”

Most Iowa apple orchards, he says, market their produce directly to farmers markets, farm stands and you-pick operations. Visiting a local orchard is a great way to find new varieties which may not be carried in a grocery store. To find an orchard near you, visit the directory at the Iowa Department of Agriculture website: www.idalsdata.org/fmnp/index.cfm