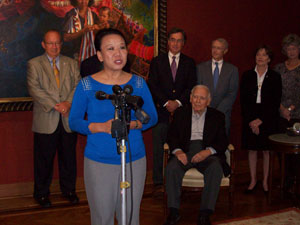 Organizers of the World Food Prize have established a new award, to be given annually, to honor an Iowan who has provided “significant leadership” in confronting hunger.  The award is named for former Iowa Governor Bob Ray who led international efforts to rescue the so-called “boat people” and feed refugees from southeast Asia.Ray attended a news conference today at World Food Prize headquarters in Des Moines where the “Robert D. Ray Iowa SHARES” Award was unveiled.

“I feel very fortunate that I’ve had opportunities to help people and to particularly help themselves and so while I was told not to say anything, I violated that rule,” Ray said, as former staff members surrounding his chair laughed, “but you’ll forgive me, I hope.”

Today is Ray’s 85th birthday and a group of his former aides as well as former southeast Asian refugees serenaded him and posed for several pictures.  World Food Prize president Ken Quinn, a former U.S. Ambassador to Cambodia, said the recipient of the first Robert D. Ray Iowa SHARES Award will be revealed October 15.

“I’ve been in a lot of situations, but I know of no greater moral political leader that I’ve ever encountered in any way than Governor Bob Ray,” Quinn said.

Som Baccam was 11 years old when she and her family arrived in Iowa back in 1975 — the first family of Tai Dam refugees Ray helped bring to the state from a refugee camp in Thailand.

“We wrote letters asking governors to start the program and no one started it except him and just to our people, to our community, we feel that he’s almost like Abraham Lincoln,” Baccam said. “He saved us.” 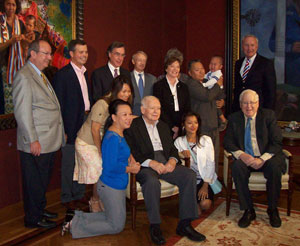 According to Iowa Asian Alliance executive director Nu Huynh, the annual award will be a way to tell the story of Ray’s leadership for years to come.

“We want to ensure not just that not just my parents and me as a refugee coming here, but all of the future generations know that history and the role that he played in changing so many lives,” Huynh said, “and truly for the better.”

Huynh and her family came to Iowa in 1979 as refugees. Ray told reporters today’s event and the naming of the award in his honor was “somewhat staggering.”

“I’m overwhelmed by all this support,” Ray said. “These are people that made a difference in the world and they’re here today to support me which, you know, is something that’s magnificent.”