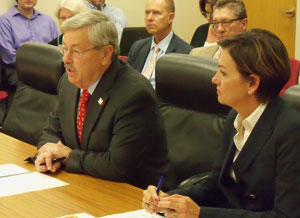 Governor Branstad and Lt. Governor Reynolds talks to the Board of Education.

Governor Terry Branstad met with the State Board of Education Thursday to discuss the group’s education goals for the next year.  The state passed a major reform package in the last legislative session, and Branstad was asked after the meeting if he is sticking with the plan for a state education standard even though Iowa is known for allowing local control of education.

“That’s the reason we’ve gotten inept for years, for having no state standard.  We’re are the last state in the country to do it. Isn’t about time?  We’ve gone from best in America for student achievement to the middle of the pack,” Branstad says. “We are committed to going back to the top. How are we going to get to the top? We’re gonna have to have some clear understandable state standards, and we need to make sure that these are  high academic standards and local school districts will have the authority to establish some curriculum to meet that.”

He says it’s key to understand schools can still have control with the state standards. “Just because we have state standards, expectations and we have a fair measurement to see if we are achieving those standards — it still gives plenty of flexibility for local school districts  to have a curriculum to meet that,” according to Branstad. The governor says they have a lot to do to move ahead with implementation of the reforms passed in the last session.

Branstad was asked if there are things that need to be changed in the plan, as some concerns have been raised over changes in home schooling rules. “I think we ought to give it an opportunity to see what can work in terms of implementation,” Branstad says.

While he says it’s early to discuss new ideas for education in the next session, Branstad says one are he’d like to focus on is helping principals. “We’re looking at maybe doing a principal academy to help them improve their leadership skills,” Branstad says. “You hear more than anything, you’ve got a great principal and they have the ability to inspire and encourage teachers to be more effective.” He says they want to help schools capitalize on the leadership of the principals.

The governor spoke with the Board of Education for about 45 minutes, and during that time praised new Education Department director Brad Buck as a person who can move the education reforms forward.