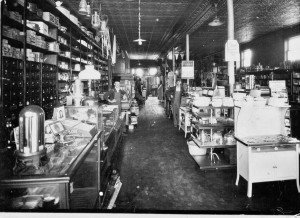 Inside the New Providence Hardware store in 1929.

Tom says the business has managed to survive many ups and downs that including the first year of operation which was right around the time President Abe Lincoln gave his Gettysburg Address. “I’m not sure there’s a business professor out there that would advocate starting a business in the middle of a civil war, but none the less they did. The railroad came though and it went a mile-and-a-half from town. Main Street completely burned to the ground in 1910, but there was a group of business leaders that put a building corporation together and put up new buildings,” McDonald says.

The hardware store moved into one of the new buildings, but that wasn’t the end of its trials. The Great Depression came next and then there were two World wars, the 1980s farm crisis, and finally the advent of big box stores like Walmart and Menards that drove many similar small town stores out of business. 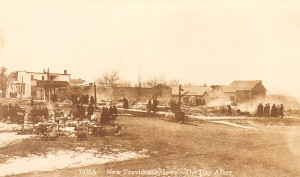 The New Providence Hardware store burned down with other buildings on Main Street in 1910.

McDonald believes New Providence Hardware has kept going in part because of the community support. He says that was evident when they started making plans for the 150th celebration. “When they found out what was going on, the immediate response was ‘what can I do to help?,” McDonald explains. “And people have shared so openly with their time and their resources to help pull this celebration off — that I think probably that’s what I’ve decided is the reason that this store is here is because people want it here.” 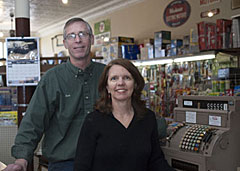 McDonald has done some upgrades on the store, but much of it remains historically true, including a non-electric cash register. The building has been nominated to be on the National Register of Historic Places. He says one thing he has tried to keep up to date is the inventory needed by the customers.”I think the various owners throughout the years — there’s this notion that you can’t sell from an empty wagon, but likewise you can’t sell much if all you have is a wagon full of buggy whips,” McDonald says.  “So, it’s always been important to keep the wagon full, but also to stock it with product that matches the needs of our local clientele.”

Adjusting to the customer’s needs has included adding a heating and plumbing business and selling appliances. McDonald says providing the personal service that you can’t always get with the major chain stores is another key to the store staying open.

“We’ve always maintained a strong, diverse inventory that matches the needs of our customers, but we also take good and services to the customers,” McDonald says. Events get underway today at two p.m. with a ceremony recognizing the historic 150th anniversary with special guest, Governor Terry Branstad, followed by an ice cream social. The festivities continue Saturday with an antique car and farm showcase, live music, and a free lunch as well as a 150th Anniversary Sale.

Additional information on the celebration is available  at www.newprovidencehardware.com.