You are here: Home / Fires/Accidents/Disasters / State Fire Marshal is reassigned 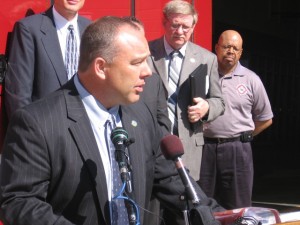 Reynolds has been Iowa’ fire marshal since April of 2010. His resignation comes after he wrote a column in the July issue of a publication from the Iowa Firefighters Association. In the column, Reynolds vented about not being able to find enough volunteers to install smoke detectors in homes in Des Moines as part of a statewide effort.

After some complaints about the column, state Public Safety Commissioner Larry Noble reportedly apologized to the head of a Des Moines firefighters union.