You are here: Home / News / Branstad says if his trooper escorts “value their jobs” they won’t speed (AUDIO) 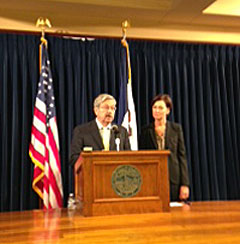 Governor Terry Branstad has issued a second warning to the state troopers on his security detail who drive his vehicle.”If they value their jobs, they’re going to abide by the law,” Branstad said today during his weekly news conference. “I made that clear. If they value their jobs, they have the same responsiblity as any other citizen to abide by the speeding laws of this state.”

The SUV in which Branstad was riding was clocked speeding 19 miles above the interstate speed limit in April and the governor said in July troopers needed to obey traffic laws. However, it was recently revealed the governor’s SUV was stopped again for speeding, in late August.

“They’ve now been penalized not only by the citation or by the fine,” Branstad said. “…In this case it was a warning, because that was what any other citizen would get, but also they’ve been sanctioned by the department.”

The trooper driving Branstad in August was pulled over near Hampton, but was issued a warning rather than a ticket because he was driving within 10 miles an hour over the posted speed limit. The trooper driving Branstad in April did not get pulled over, but later received a $181 ticket for speeding.  Two of the Democrats running for governor have suggested there is a “pattern of behavior” which indicates Branstad has asked his security detail to speed. Branstad told reporters this morning he is only “aware” of two instances in which his vehicle has been speeding.

“I have never been stopped for speeding as governor,” Branstad said. “I’ve been a passenger in the backseat.”

Ousted Iowa Department of Public Safety Commission Brian London says the governor’s office ordered a check of a federal database and discovered at least 20 occasions when a law enforcement officer called dispatchers to check the plates of the governor’s vehicle. Branstad said federal law prevents him from releasing those details to Iowans.

“I can tell you the Department of PUblic Safety should have informed us when we requested this information that this information was not public and we were not entitled ot it,” Branstad told reporters today.