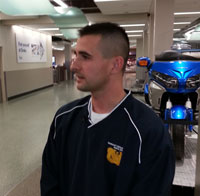 The soldiers are members of units based in Waterloo and Boone. They’ll be operating UH-60 Black Hawk helicopters. Thirty-one-year-old Jason Cutsforth, who lives in the Des Moines suburb of Windsor Heights, is a Black Hawk pilot. “Members of the Iowa National Guard, we’re citizen soldiers and we’ll always be citizens first. There’s so much pride for us, being citizens and helping other Americans in times of need,” Cutsforth said.

He and many of the other soldiers on this mission have spent time in Afghanistan. “We’ve had extensive training in the past few years and most of us have redeployed from combat operations in Afghanistan, so we’re very familiar with the mission. We’re very well trained, prepared, and very excited to be able to do a stateside mission,” Cutsforth said.

He spoke with reporters at the Des Moines Airport shortly before catching a flight to Colorado. Many roads have been washed out by the massive flooding and the only way to get medical attention to victims in the mountainous areas of Colorado is by helicopter.

Cutsforth has been flying Black Hawk helicopters for six years. “As far as the medical capabilities, it’s a full advanced support helicopter. We’ll have a crew of four — two pilots, one medic, and one crew chief,” Cutsforth said. “We’re capable of treating approximately three patients at one time. If we have seats installed in the back, if they’re walking wounded, we’re able to transport 10 to 15 walking wounded at one time.”

The floods in Colorado have killed at least 8 people, damaged or destroyed as many as 2,000 homes, and washed out hundreds of miles of roads, leaving many mountain towns completely cut off. Cutsforth is a firefighter and paramedic in Windsor Heights and has been following the news of the flooding in Colorado closely.

“We’re very aware of what’s going on out there. All of us wish we could do something to help, so to be selected to go out to Colorado to help out in a time of need, there’s no greater joy in my life than to just help out people,” Cutsforth said. The Iowa soldiers are expected to be in Colorado, stationed in Aurora, through October 11th. The helicopters are already on site and other equipment for the Iowa soldiers is being provided by the State of Colorado.

Twenty-one Iowans from various chapters were deployed for two-week stints in Colorado after flash floods mid-month washed out roads and bridges, killing eight people and forcing thousands to evacuate.

Leo Mork of Swisher drives an Emergency Response Vehicle, or “ERV.” “It looks like an ambulance, but it’s set up to do feeding or hauling of supplies,” Mork says. He and his wife, Diane, estimate they have gone on 20 Red Cross deployments in various parts of the country. Mork says in some ways, the flood damage in Colorado reminds him of Iowa’s experiences in 2008.

“The infrastructure is really the critical part,” Mork says. “A lot of roads closed, and for us, it’s a challenge to get around, kind of like the Iowa floods. To get across town in Cedar Rapids five years ago, there’s one way to get there — maybe.” He says their primary goal is to take care of people as best they can. Rich Newkirk is a retired guidance counselor from Des Moines Public Schools. Colorado is his first assignment with the Red Cross.

Newkirk is helping at shelters for people who lost their homes in the flooding. Newkirk says, “The Boulder location, we’re serving anywhere from a hundred to 150 people who are sleeping on cots and being fed by the Salvation Army.” He explains that despite the best efforts of aid providers, it’s a difficult task to reach out to everyone who’s been impacted by the floods.

“They’re inundated,” Newkirk says. “The systems and the infrastructures of all the providers and those that are trying to help them can’t move fast enough and you have shelters that are closing.” Newkirk says the people he’s met on the trip have made the experience worthwhile. To donate to the cause, visit www.redcross.org

Matt Kelley contributed the Red Cross portion of this story.