You are here: Home / Sports / Cyclones fall 31-30 to Texas in controversial ending (audio) 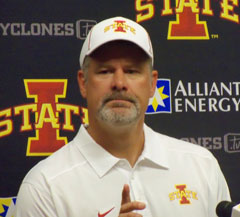 Paul Rhoads after the Texas loss.

Texas scored with 51 seconds to go in the ballgame and converted the extra point to hold off the upset bid by Iowa State Thursday night 31-30 in Jack Trice Stadium in Ames.

The tying touchdown came after a play at the goal line with 1:08 to play where it looked like ISU linebacker Jeremiah George had pulled the ball away from the Texas running back, but the officials ruled the back was down by contact and a video review upheld the call

A very emotional Cyclone coach Paul Rhoads, thought his team had the turnover. “I’ve got pretty good eyesight. The view I had of that gigantic screen in the north end zone showed their guy was not down and our guy with the football,” Rhoads says. He was asked what the officials told him about the play.  “I got the same explanation that everybody in the stadium got– the call was confirmed,” Rhoads replied

Rhoads says the conference will review the play like they do all such disputed plays and will decide what happened.  Rhoads was asked what he told his team after the close loss. “I tell them to get ready for Texas Tech. To keep doing the things they’re doing, to keep giving it up for their teammates, to keep working with extreme emotion and effort,” Rhoads says.

George says he asked an official about the call after the play stopped. “As they were reviewing the play I was ‘like what’s the rule and how could you call it any other way? And he was like ‘his momentum stopped or something like that’,” George says. “But his momentum didn’t stop. If he were to continue to push and cross the goal line they would have said “touchdown.”  Why didn’t they call a fumble? I don’t understand that rule.” 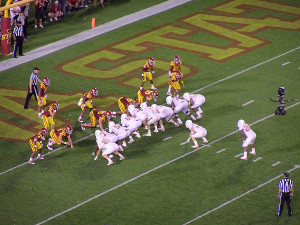 Texas at the goal line.

George says they can’t dwell on the loss and have to move on to the next game. “We can’t let it linger because if you think that the Texas Tech Red Raiders care about Iowa State getting a game stolen from them, they really don’t,” George says. “It’a ranked team on the road, it’s going to be a very hostile environment, and we’re going to have to win this football game.”  Iowa State falls to 1-3 overall and 0-1 in the Big 12.