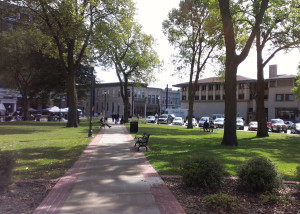 Downtown Mason City has been declared one of the “10 Great Neighborhoods” in the United States. The ranking comes from the American Planning Association.

“We’re looking for communities that have outstanding and unique qualities,” says Denny Johnson, public affairs coordinator for the American Planning Association. “For instance here in Mason City there’s the Park Inn which was designed by Frank Lloyd Wright, so that was a real marker for us and is actually what got our initial attention to this neighborhood.”

Johnson says the Park Inn isn’t the only thing that put Mason City on their top 10 list, however. From diverting vehicle traffic to make Main Street in Mason City more pedestrian-friendly to revitalizing other buildings in the downtown area, Johnson says Mason City political and business leaders as well as city residents collaborated on these improvements.

“You know a plan is a way for the whole community to participate and bring all their ideas together and sort of sit down and say, ‘Hey, where do we want to go with our community? What do we want it to look like? Are these historic resources important to us?'” Johnson says. “It allows people to have that conversation.”

Famed architect Frank Lloyd Wright designed six hotels. Five were built and only one remains — The Park Inn Hotel in Mason City. The hotel was built in 1910, but closed in 1972 and was split up into apartments.

“The restoration of Park Inn was a citizen-led effort,” Johnson says. “It had been closed for many years and the citizens said, “Hey, we can’t just let this sort of national treasure just sort of fall apart,’ and by restoring it — which cost about $18 million — they now have a sort of economic engine for the community that’s helping draw in tourists and conferences.”

An adjacent building designed by Wright — the City National Bank — has been restored, too, and is part of the Park Inn complex. This fall the facades of 10 buildings on Mason City’s Main Street are being restored. Local banks have offered reduced interest rates on loans for improvement projects in the downtown area. There’s also been an effort to boost the “curb appeal” along Federal Avenue in Mason City.

In 2011 the American Planning Association ranked  Grey’s Lake in Des Moines as one of the great outdoor spaces in America, plus the Gold Coast and Hamburg Neighborhoods in Davenport were also recognized by the group that year.

Photo courtesy of the City of Mason City