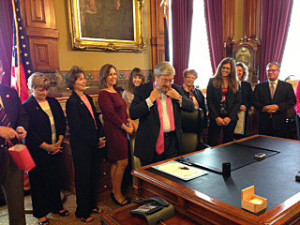 Representatives of groups like the American Cancer Society were on hand to watch Branstad sign the proclamation, then one of them handed the governor a pink tie.

“Wear that and think of the fight against breast cancer throughout the state,” said Roger Dahl of the Susan G. Komen Foundation.

Standing behind the massive desk in his formal office, Branstad shed his tie and started tying the pink one around his neck. “It goes with my shirt, I 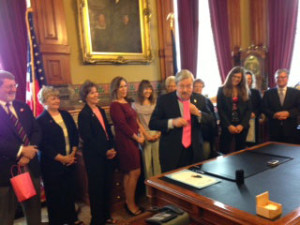 The governor lamented the lack of a mirror, but finished his windsor knot in less than a minute. It took Branstad more than twice as long to read the proclamation about Breast Cancer Awareness Month.

He began with sobering statistics.”It is estimated that 33,000 women in Iowa are living with a diagnosis of breast cancer,” Branstad said. 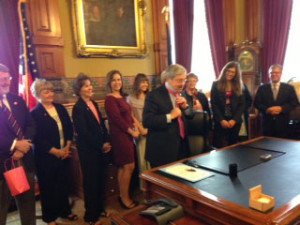 One out of eight women will be diagnosed with breast cancer at sometime in their lifetime. But with early detection and advances in treatment, there’s now a 99 percent five-year survival rate when the breast cancer is localized.