You are here: Home / Crime / Courts / Iowa wrestler now faces other charges after shooting a duck 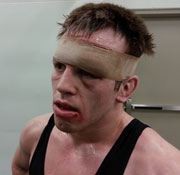 The University of Iowa wrestler who admitted to shooting a duck with an arrow is now facing other charges, according to a DNR news release:

Iowa City – State charges will be filed against University of Iowa wrestler Ethen P. Lofthouse Bottorff-commonly known as Ethen Lofthouse–after an October 4 incident, in which a duck was shot in his backyard.  Iowa City police and a DNR officer responded Friday afternoon to a complaint of residents shooting arrows at a duck in the yard of a home on Jema Court. The residence is near Willow Creek Park on the city’s west side.

Police say the duck had been shot and taken into the garage. They say Lofthouse admitted he had shot the mallard duck; that he intended to eat it. Police cited Lofthouse with discharge of his bow, in violation of a city projectile ordinance and for maintaining a prohibited animal; without necessary permits; in this instance lack of proper hunting or migratory bird stamps or fees.

Lofthouse was cited by the DNR for illegally taking the duck; out of season and without required federal and state migratory bird stamps. Additional questioning led to five counts of failure to register harvested deer with the DNR.  Officers say Lofthouse shot the deer while taking part in the city of Coralville deer management zone hunt, which has been underway since September 14.  Deer hunters who harvest a deer in any Iowa season or management zone hunt must register that harvest with the Department of Natural Resources before midnight, the day after it is tagged.