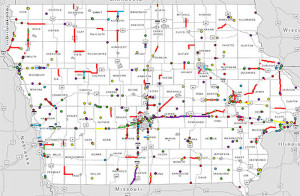 Anderson says several factors allowed them to move the projects up in the 5-year plan. Anderson says the money is available for the projects due to favorable bid lettings that saw current projects that came in under budget, along with department budget savings, and more federal funding than expected.

See a complete list of the projects here: www.iowadot.gov/program_management/five_year.html