You are here: Home / Sports / UNI coach talks about his son’s injury (audio) 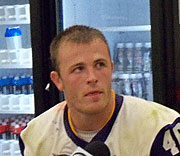 The UNI football team is dealing with two significant losses. The Panthers fell to #1 North Dakota State on Saturday and also lost leading tackler Jake Farley for the season as the linebacker broke two bones in his leg.

UNI coach Mark Farley, Jake’s father, says the Jake is expected to make a full recovery. “Jake’s doing good, that was a tough deal, a serious injury. He has surgery that night in Fargo and he will make a full recovery,” Farley says. He says they ended up putting a rod in Jake’s led and there were not torn ligaments or other complications.

Farley says there’s no way to deny that it felt different seeing his son suffer such a serious injury: Audio: Mark Farley :19

This is the second time that Jake Farley has suffered a broken leg. The first came prior to Farley’s transfer to UNI, in the preseason of 2011 when he was a true freshman at Kansas.
Audio: Mark Farley :28

Farley is the third starter that UNI has lost to a season ending injury already this year.  Coach Farley says his squad is becoming very adept at overcoming adversity as they’ve had other injuries along the way, but he says the team continues to battle and he expects they will persevere through his too.

The Panthers host Southern Illinois for their homecoming game on Saturday afternoon.