You are here: Home / Military / Admiral at Offutt Air Force Base fired after Iowa gambling allegations 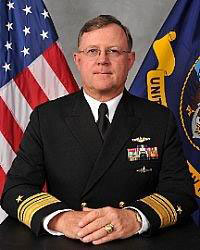 The officer who’s been second-in-command of the U.S. nuclear arsenal has been fired after being accused of $1,500 worth of counterfeit chips at a Council Bluffs casino.

A Navy spokesman says Vice Admiral Tim Giardina was removed from his position at Offutt Air Force Base near Omaha on Wednesday. Giardina was also demoted to a two-star admiral. For nearly two years Giardina has been the deputy commander of U.S. nuclear forces.

The gambling allegations surfaced in June at the Horseshoe Casino in Council Bluffs. Agents from the State of Iowa and the Navy are investigating the case.

Giardina is a highly decorated officer with more than three decades of service in the Navy. He had been deputy commander and chief of staff of the U.S. Pacific Fleet before his assignment at Offut Air Force Base. He was stripped of his security clearance in early September.