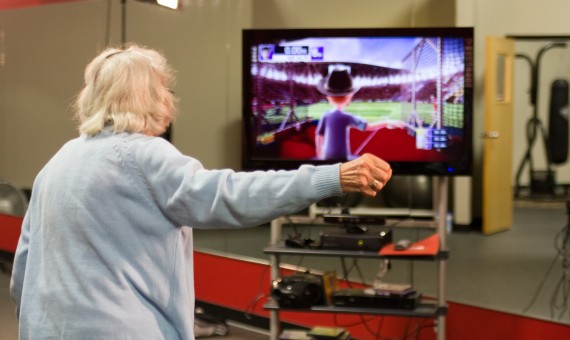 Photo thanks to ISU

While video games are usually associated with young people, a program being developed at Iowa State University has elderly Iowans taking joysticks in hand and heading for their flat-screen TVs. ISU Professor Jennifer Margrett, director of the gerontology program, says they’re focusing on seniors in rural parts of the state, using video games to get them moving.

Margrett says, “The goal of the project is to bring physical activity opportunities to rural areas and communities that may not have a senior center or a gym or any recreational options.” The video games being used aren’t like Space Invaders or Pac Man. They’re on the Wii format using wireless controllers and include sports like bowling and tennis.

High school and college-age trainers are leading eight-week exer-gaming programs which combine video games with strength-building exercise. “The older adults get the benefit of the physical activity and learning something new,” Margrett says. “There are also some interactive activities where they get to know fellow older adults as well as the younger adults in the community.”

She notes, the younger adults benefit, too, as they interact with their elders and learn from their experiences. The program is called LIFE, for Living well through Intergenerational Fitness and Exercise. She says they’re seeing success with both bridging the generational gap and in getting older adults on their feet and socializing.

“You’re executing certain moves that are working on your flexibility or your cardiovascular endurance or your strength,” Margrett says. “It’s sort of like exercising but you’re having fun and not necessarily focused only on the exercise part.” The program zeroes in on whole-person wellness, Margrett says.

By being social and playing interactive games, she says, older adults are exercising their bodies and brains while building relationships.