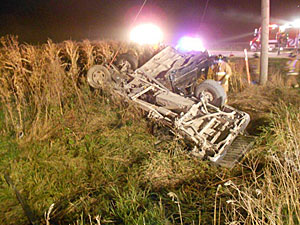 Two people were killed and three others injured in a traffic crash Sunday night in northeast Iowa.  The crash, involving two pickups, happened at an intersection near Oelwein in Fayette County. Both drivers were killed. They’re identified as 18-year-old Dakota Rohde of West Union and 28-year old Shawn Brehme of Tripoli.

A passenger in Rohdee’s vehicle, 23-year-old Alex Jans of West Union, was taken by air ambulance to University of Iowa Hospitals and Clinics. He was not wearing a seat belt, according to the Iowa State Patrol.

Two children in Brehme’s vehicle, his sons, 9-year-old Seth and 7-year-old Sandler, were also transported to UIHC by helicopter. Both of the children were wearing seat belts. The conditions of the three people injured in the crash are not available.

A University of Iowa Hospitals spokesperson says Alex Jans was treated and released. Seth Brehme is in fair conditions, and Sandler Brehme is in critical condition.