You are here: Home / Agriculture / Pumpkin grower calls it best season in a decade 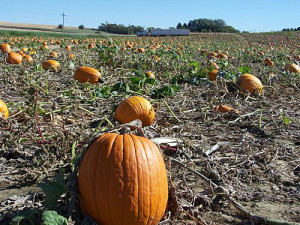 The wide variety of weather this spring and summer caused stress for many plants — but not pumpkins. Diane Ten Napel, along with her husband, has operated Diane’s Pumpkin Patch in Plymouth County for the last 10 years.

“It’s been a tremendous year this year, I don’t think we’ve ever had such large pumpkins and they are good quality and very nice. People are really happy,” according to Ten Napel. “We’ve found out through the years that the pumpkins don’t like it overly wet, and we got timely rains just when we needed it.”

Not only did they get the rain when they needed it, they also got a hot spell just in time to finish the pumpkin growing season. “They needed that also because they were still green, and that ripened them up and we were in good shape,” Ten Napel says.

They have a three-acre pumpkin patch and they do the planting and growing and then let the customers do the picking. “We’ve found out over the years that people don’t like us bringing ’em in out of the field. They want that pleasure of going out into the field and picking and finding their own,” Ten Naple says.

The pumpkin patch offers free pumpkin painting for kids along with a petting zoo. Diane’s Pumpkin Patch is located about three miles west of Craig on Plymouth County Road C-12.