You are here: Home / Human Interest / Survey looks at Iowa attitudes toward hunger 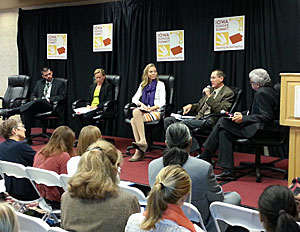 A study released today  by AARP shows a majority of Iowans donated food or money in the last year to organizations that provide food to those in need. The survey was released at the Iowa Hunger Summit in Des Moines.

AARP State Director Kent Sovern says the next step is to find ways to encourage even more Iowans to volunteer and donate. “We’re seeing from our survey that Iowans are very philanthropic, more than half give time or money to local efforts, but they have said in large numbers, we would do more if asked,” Sovern said. During a panel discussion at the summit, conversation centered around public awareness of local food relief efforts.

Betsy Danforth-Richey of Iowa Food Access and Health said she sees an untapped opportunity in donating fresh food from gardens. “That’s a type of food that food pantries don’t really have access to a lot. We’re trying to encourage people to eat fruits and vegetables, but we’re not following up with the access piece,” Danforth-Richey said.

Sixteen-percent of survey respondents said they had donated food from their own garden to a local pantry, but Danforth-Richey noted 41-percent said they would, if asked. One in eight Iowans faces the risk of hunger each day, a figure that 51-percent of those surveyed found surprising.

Cory Berkenes is State Director of the Iowa Food Bank Association. “It verifies our idea that not everybody understands the issue of hunger,” Berkenes said. “Hunger is an easy issue to rally around, people want to help if they just know how to help and who to help.” Nearly 13-percent of Iowa households are labeled as “food insecure,” meaning they routinely lack access to food.

The survey shows 59-percent of Iowa agree that the state should maintain SNAP benefits, commonly known as food stamps. Berkenes said the program is helping families “get back on the feet” and shouldn’t be targeted for more federal cuts. “It’s a moral right, it shouldn’t be a political issue,” Berkenes said.

The telephone survey of 800 Iowans age 18 and over was conducted for AARP in September by Precision Opinion.