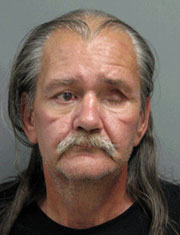 UPDATE 2:40
Council Bluffs police now say a woman shot at her home this morning died.  Police were called to the home on the report of a disturbance and shots fired and found 44-year-old Millisa Cox in the front yard. Cox was taken to the hospital where she was pronounced dead. Officers noticed a man passed out on the floor of the home with a non-life threatening gunshot wound to the chin.

Police say the man is 55-year-old Darwin Cox, and it appears Cox shot Millisa to death and then unsuccessfully attempted suicide. A police statement says Darwin Cox “will most likely” face charges.

A domestic dispute led to a shooting at a home in Council Bluffs this morning. Two people were taken away in ambulances, at least one of them with gunshot wounds.

Alex Dolezal is a neighbor who went into the house after the violence started but before shots were fired. “The mom tried to stab the dad with scissors and then tried to stab the son with a knife and the son took the knife from her and bit her,” Dolezal says. “We showed up and we walked in the house and they were calm, they were fine. They fight almost every day. I live six houses down and you can hear them yelling.”

Council Bluffs Police Lieutenant Dan Flores can say little about what happened, as details are still being sorted out. “A female transported to the hospital,” he says. “A subject inside the house was taken into custody. He’s also being treated for some injuries.” It’s unclear who shot who, or if both adults were shot by each other.

One report says the woman is hospitalized in critical condition. Lieutenant Flores could not elaborate on the cause of the incident. “It was a domestic disturbance, a quarrel, that resulted in shots fired.”

No names have been released. The standoff began around 8 A.M. and ended about two hours later. Neighboring schools were placed on lockdown as a precaution.