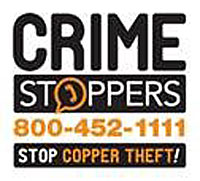 Copper is used for wiring because of its ability to conduct electricity, but in recent months the value of the metal has created a magnetic appeal to thieves. The electric companies and coops across the state have combined for a special Crime Stoppers Program aimed at the copper thieves.

Bob Dickelman is a spokesman for the effort. “We’ve had some significant thefts, we’ve had some smaller thefts, but they all add up to big problems for the utilities because the usually leave behind a problem that’s fairly expensive to repair,” Dickelman says.

He cites the example of thieves who cut a 15 to 20 foot piece of copper wire from a regulator southeast Iowa substation. “Which caused it to fail, caused other damage to the substation and an outage to 900 customers,” Dickelman explains. Copper sells for around $3-a-pound on the scrap market and the piece of wire was worth about $50, but the failures at the substation cost $42,000 to repair, and kept customers without electricity for several hours.

They are asking the public to help combat the copper thefts by calling when they sees something that doesn’t look right. “If someone sees something suspicious going on at an electric utility substation, or around any of their other equipment, or even a power pole or a meter at a residence or a business or a farm — we would ask them to call Crimestoppers at 800-452-1111,” Dickelman says.

For those thieves who are stealing copper wire, Dickelman says you could be risking your life for a small amount of money as cut ground wire can unleash an explosive 69,000 volts of static electricity. “We’ve had several cases where somebody cuts a wire causing a giant arc — even an explosion,” according to Dickelman. “We’ve had cases where concrete has been burned away eight inches deep. The explosion or the arc literally melts the concrete.”

Dickelman says after you call in your tip and the information leads to an arrest, you can be rewarded. He says you can call Crimestoppers back to get instructions for receiving an award that can range up to $1,000. The average reward is between $20 and $200.  The state’s largest utility companies, MidAmerican Energy Company, and Alliant Energy are part of the effort as are the Iowa Association of Electric Cooperatives, the Iowa Association of Municipal Utilities.

Dickelman says they are hoping more attention to the issue will lead to the caputure of thieves and help stop the damage being done to electrical systems.