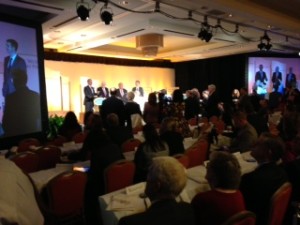 “Each of these people will be given the chance to go to one of the four countries in the program — Sierra Leone, Liberia, Rwanda or Malawi — and implement their idea, their best idea for how they can improve food security and agricultural production,” Blair said.

Blair said through his work in Africa he’s discovered government leaders face three primary challenges: adequate electricity, investment and agricultural output. Blair’s “Africa Governance Initiative” and the Howard G. Buffett Foundation will award each fellow $150,000 — $80,000 to launch their idea and the rest to cover travel and living expenses in Africa for a year.

“This is really an effort to try to get some of the best minds, young minds to think about what are some of the solutions and then give them the financial opportunity and the access to an organization that can provide it to go try to do something,” Buffett said Thursday. “If this works, believe me, this is something that we’ll do more of.”

Buffett, a farmer who is the son of financial guru Warren Buffett, uses his foundation to improve food and water security as well as “conflict mitigation” in Africa.

“What I have learned is the younger generation which is a lot younger today than I like to admit, you know, they think differently. They have different tools in their hands. It’s really pretty amazing what can happen with technology,” Buffett said yesterday during a news conference in Des Moines. “I don’t believe technology can solve every problem by any means, but where it can solve problems it ought to be used.”

The four winners of these $150,000 fellowships for work in Africa will be chosen by a panel organized by World Food Prize officials. Their names will be announced at 2014 World Food Prize events in Des Moines. The application process is online at www.40chances.com.