You are here: Home / Fires/Accidents/Disasters / Events in Iowa to commemorate anniversary of Superstorm Sandy (AUDIO) 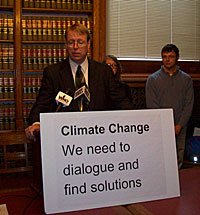 Iowa advocates of action to address climate change plan a series of events in Iowa this week to mark the one-year anniversary of “Superstorm Sandy.” Senator Rob Hogg, a Democrat from Cedar Rapids who helped organize the events, says the 2008 flooding that struck his city “pales in comparison” to the damage and deaths caused by the storm that struck the east coast in October of last year.

“We are seeing more of these disasters with greater severity,” Hogg says.

Critics charge leading British climate scientists concealed data that was contrary to their conclusion that the Earth is warming and human activity is contributing to that warming. Hogg says skepticism is healthy, but he argues climate change is “settled” science.

“Even if you are an Iowan who for whatever reaason just doesn’t believe that climate change is real…that doesn’t take away your obligation to remember the victims, to support the survivors or to commit to prevent future disasters,” Hogg says. “They are happening.”

Cathleen Bascom is dean of St. Paul’s Episcopal Cathedral in Des Moines where a ceremony will be held Friday evening with religious leaders from Africa

“We simply will be remembering our brothers and sisters on the eastern seaboard and their suffering last year and also we’ll be seeking inspiration on what we can all do as stewards of the Earth,” Bascom says.

Events are planned in Cedar Rapids, Davenport, Dubuque and Fairfield as well. Rev. Susan Guy, the executive director of Iowa Interfaith Power and Light, says people of faith are “especially concerned about the moral and ethical implications” of climate change.

“Today and all this week as we remember the victims of Hurricane Sandy, I would ask all of us to make a pledge to work together to address climate change for the benefit of the most vulnerable in our society and for our children and future generations,” Guy says.

Fifteen-year-old Glori Dei Filippone of Des Moines is a member of a group called iMatter — Kids Versus Global Warming. She joined Hogg and other organizers at a statehouse news conference this morning.

“Scientists expect disasters related to climate change to increase which will affect my generation and yours,” she said. “…All I’m asking you to do is speak up, take charge and act now or nothing’s going to change.”

Superstorm Sandy caused 117 deaths and $70 billion dollars in damage along the east coast, but sponsors of this week’s events in Iowa to commemorate Sandy’s one-year anniversary say climate change continues to cause other severe weather events across the globe, from the cyclone that hit India last week to the flooding that devastated sections of Colorado last month.