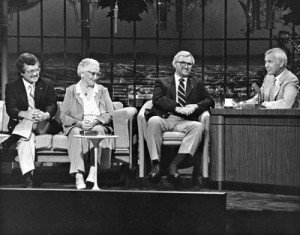 A celebration is planned in Corning at two o’clock this afternoon to mark the opening of the Johnny Carson Birthplace. The long-time “Tonight Snow” host was born in the home 88 years ago today.

Chris Nelson of “The Johnny Carson Birthplace Society” says they’ve spent about $200,000 restoring the home to the 1920s era, with antiques as well as Carson memorabilia on display.

“It is a combination of just what things were like in 1925 and kind of the humble beginning that Johnny was born into and started with and things that we are collecting now,” Nelson says.

Terry Rich — the president and CEO of the Iowa Lottery — was a guest on “The Tonight Show” and he’ll be in Corning for today’s festivities.

“In 1981 we did a promotion for a little town called Cooper, Iowa, a town of 50, and we were looking to adopt a celebrity for our centennial,” Rich says. “It caught on via the wire service and the Johnny Carson show called and said, ‘Come on out. We’d love to have you interview Johnny.'”

“The cool part of the show is that we were up for 20 minutes,” Rich says. “We made it through two commercial breaks and Tom Jones then performed after us, so it was really a pretty special night and then they replayed it on ‘The Best of Carson’ two years later.”

Rich is taking some of his keepsakes to Carson’s birthplace.

“When first contacted by the folks in Corning we tried to figure out if there is anyone else from Iowa still alive that appeared on the Johnny Carson show,” Rich says. “I have the talent agreement that I signed during the show and a picture and they gave us each our own dressing room with a big star and our name, so I’ve got some fun memorabilia that we’ll display at the birthplace and it should be a lot of fun.”

During that 1981 show, Carson asked a few questions himself.

“How many people applied for this honorary 51st citizen?” Carson asked.

Rich replied: “We had about 50-70 applications back already from around the Iowa area and now, nationally, we’re getting quite a few back.”

“We also got one from Mickey Mouse, so there’s competition, real competition,” Rich said.

Carson made one of his famous faces and the crowd laughed.

“If I get beaten out by Mickey Mouse, you’ll never hear the last of this,” Carson quipped.

Carson did win the title of honorary “51st citizen” of Cooper, Iowa. The town’s main street is named Johnny Carson Avenue, plus he won a free plot in the town’s cemetary and a tombstone with Carson’s name still sits there. Rich describes his appearance on “The Tonight Show” as “an amazing experience.”

“When we got on the show I realized that Johnny was exactly how you saw him at home,” Rich says. “He was very kind, he was very gentle and very friendly — a true Iowan. I mean basically he was what you think of as Iowans. He could talk to anybody.”

Carson occasionally mentioned his Midwestern roots on “The Tonight Show” and one evening he called Mabel Gaskill, a Corning woman who babysat a one-year-old Johnny Carson for three days when his mother was hospitalized.

“What kind of a kid was I?” Carson asked.

Gaskill replied: “Well, you were a real good kid, a real cute kid.”

The Carson family lived in Corning for three years. Carson hosted “The Tonight Show” for 30 years. He died in January 2005 at the age of 79.