You are here: Home / Human Interest / Iowa Holocaust Memorial is dedicated as a tribute and reminder 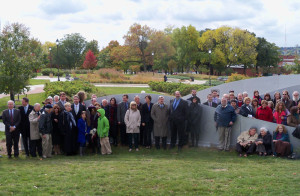 Several people turned out for the dedication of the Iowa Holocaust Memorial.

The Iowa Holocaust Memorial on the west side of the state capitol building was dedicated in a ceremony today. The memorial designed by Confluence Architects of Des Moines features four aluminum wall panels that contain inscriptions and photos about the Holocaust and its survivors.

Kitty Williams, who was 19 when she was taken to a concentration camp, joined others who attended the dedication under overcast skies. “I can’t tell you how it touches me,” Williams says. 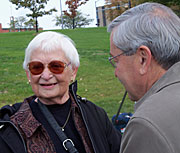 She is now 89 and says the memorial is important as a way to honor those who suffered, and will serve as a reminder of what happened. “We need to be reminded, future generations should be reminded never to forget it — because it can happen again,” Williams says. “We have to be very vigilant to try to prevent another Holocaust.”

Williams believes the holocaust is forgotten by many. “Not only that it gets forgotten, but I think that there are deniers,” Williams explains.

She hopes the memorial will be educational for many people, as she says the fight against prejudice has to continue. “In all sorts of form, not just against Jews, but against anybody who is different, different color skin, different religion — we are all the same,” according to Williams. 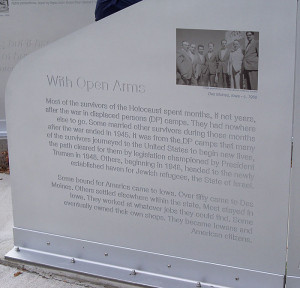 One of the inscriptions on the Iowa Holocaust Memorial.

Governor Terry Branstad was on hand for the dedication, and says its prominent place west of the capitol will ensure it gets noticed.

“There’s going to be a lot of people, a lot of children, a lot of visitors who are going to get to see the Holocaust Memorial here,” Branstad says.

The memorial sits in and area that now features plantings and steps that lead up to the capitol. “You know this used to be a very ugly parking lot, now it’s a nice park and it’s a very nice memorial,” Branstad says.

A spokesperson with the Jewish Federation of Greater Des Moines says around 100 of the survivors of the Holocaust ended up living in Iowa.  He says the wall  remembers the victims of the holocaust — some 11 million died — gives gratitude towards the Iowans who served in the United States armed forces who liberated the concentration camps, and it gives honor to the survivors who came to Iowa to build their new families here.

The memorial was funded by the Blank Family Foundation.