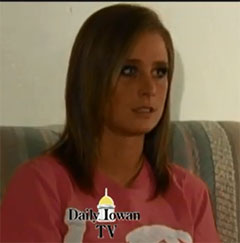 A University of Iowa student, who became infamous from her Twitter name “Vodka Samm”, is speaking out for the first time after her arrest at an Iowa football game made national headlines. Samantha Goudie of Burlington earned national notoriety and thousands of followers last month after tweeting from jail that her blood alcohol level was  341.

In an interview with the University of Iowa student newspaper, the Daily Iowan, she revealed a dark past that included an eating disorder last year that left her hospitalized and a battle with depression.

Goudie said she had all kinds of offers for endorsements and interview requests after her story took off. But, she said that’s not what she wanted. “I could have easily just taken this opportunity and ran with it and been Vodka Samm my entire life, but that’s not why I came to college, I didn’t come to college to drink and be Vodka Samm,” she said.

Goudie said she never intended to have the entire country focus on her arrest. “I was tweeting from jail because my friends follow me on Twitter, not like the entire nation,” Goudie explains. “I was completely embarrassed, I hated going to class.”   Goudie said she became depressed after the incident and had been treated for depression and her parents had put her in a program in 2012 for a severe eating disorder.

Both Goudie and her parents told the newspaper she has learned a lot from this Tweeting ordeal. Goudie says she still has some problems to fix. “I still struggle with my eating disorder, I struggle with depression and I’m still kind of working my way out of this mess — but I feel like I’ll get there though,” Goudie says. She says she wants to help others who have had similar experiences.

Her father David said he is proud that his daughter is facing up to her problems and trying to help others. “Most people who are any good at that at all have lived it,” he said.  He says it’s like the expression that you have to “walk a mile in someone’s shoes to understand what they are going through.” “Well, Sam’s walked that mile plus.”

Goudie said plans to graduate in May and plans to go to graduate school for social work to help others struggling with challenges. You can see the complete interview with Goudie on the Daily Iowan’s website at: www.dailyiowan.com/2013/10/25/Metro/vodkasamm.html

Story used with permission of the Daily Iowan