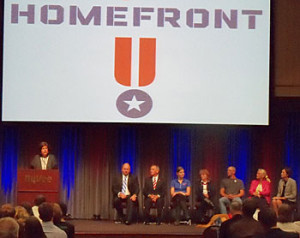 The Iowa-based Hy-Vee grocery store chain is launching an 8-state midwest effort to raise funds for three organizations that help veterans. The Hy-Vee Homefront Initiative announced today will match donations up to $100,000 for Operation First Response, Hope for the Warriors and the Puppy Jake Foundation.  P.J. Sesker, chair of Operation First Response came up with the idea for the program. “The funds will go to help wounded heroes who are waiting for their benefits from the V-A, which is probably now one hundred thousand cases behind,” Sesker says.

Operation First Response provides money to the veterans while they are awaiting the benefits. “Now a lot of these people have children, small children that need to be taken care of, so that money will be used to buy food, pay heat bills, light bills, car payments, rent, whatever they need to keep them afloat before they get their V-A benefits,” Sesker explains. 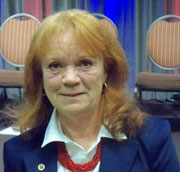 The nine-year-old organization operates in all 50 states. “We don’t care what uniform they put on — they are a hero in our eyes. We don’t care what state they come from because they’ve defended all of us,” Sesker says. Sesker says having an organization like Hy-Vee that is in so many communities will keep the veterans’ needs top of mind.She says it is easy to forget them once the fighting is over. “It’s not over for our boys who have PTSD or are missing a leg or an arm — it never will be,” Sesker says. “And that’s why I am hoping that this partnership with Hy-Vee will keep them in front of the American people and let them know that we’ve still got to take care of our boys.”

Hy-Vee CEO, Randy Edeker says he sat down with Sesker and felt the Homefront Initiative fits in well with other things they have done for veterans — such as sponsoring honor flights. “One of the things that we’ve done I think pretty effectively, is we’ve always has a little slogan that says ‘we will do well by doing good in the community.’ And we look for the needs that are out there, and we feel that there’s a real need here.” Edeker says. 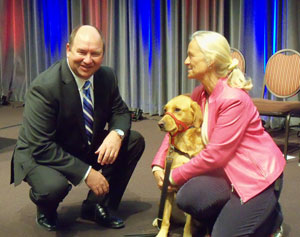 Edeker says they have a lot of employees in their eight states that are veterans and many customers who are veterans. “It’s a natural fit to develop a program around three organizations to start with that we feel are very good organizations that do grassroots help for veterans — not for show — but do real help,” Edeker explains.He says the company will take the lead in raising the money, and if that ends up being a good thing for their business fine — but that’s not the main goal.

“I think that we’re better to go do good and let you figure out later that we’re doing good. That’s what I prefer,” Edeker says. “But this is a great way to highlight these there organizations and that’s why we did it. I mean, I don’t want today to be about Hy-Vee. We still have to go raise the money.”

Tim Cox is a veteran of the Iowa National Guard who  “got blown up” as he puts it, while serving in Iraq. He got help from Operation First Response when he came home, and he says that help can be a big thing to a veteran. “Depending on the individual — it could mean paying your mortgage, rent, bills, versus eating,” Cox says.

He keeps in touch with many veterans in Iowa. “There are veterans out there that aren’t getting the help they need. And organizations like this help those soldiers,” he says. “And it’s not just the soldiers, they help the families.” Hope for the Warriors is a national organization the supports wounded veterans, and the Puppy Jake Foundation provides service dogs for veterans.

The executive director of the Iowa Department of Veterans Affairs, Robert King,  retired as a Colonel from the Iowa National Guard and knows how important the effort is for soldiers and their families.

He believes the attention this program receives will spur others to action. “I think that others will pick up on the idea, I think that it will become larger and there will be communities of this effort is you will. I just applaud Hy-Vee for stepping to the plate and providing the leadership to do it. I think this is tremendous,” King says.

The effort will take place in the Hy-Vee stores in Iowa, Illinois, Missouri, Kansas, Nebraska, South Dakota, Minnesota and Wisconsin. The first event is set for November 6th through the 16th and is called the “Round Up.” Customers in the stores will be allowed to round up their purchases to the nearest dollar, and the extra money will go to the Homefront effort.

So for example, if your purchase is 45-cents, you can round it up to $1 and the extra 55 cents will go to the program. Hy-Vee plans to have other special promotions around holidays to raise the funds. For more, go to Hy-Vee’s website and look for the Homefront logo.