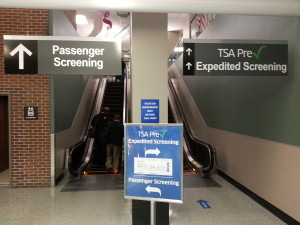 The airport in Iowa’s capital city is the latest in the country to be outfitted with the Transportation Security Administration’s PreCheck process.

Jay Brainard is the TSA’s federal security director for Iowa. “TSA PreCheck is an expedited screening program that allows pre-approved travelers to leave their shoes, light outer wear, and belts on, leave their laptops in their case, and leave compliant liquids in a carry on in the pre-check lane,” Brainard says.

Des Moines is the first city in Iowa to offer PreCheck, which is already installed at 97 other airports across the country, including Omaha. The TSA plans to expand the service to six more airports, none of which are located in Iowa, by the end of the year.

Brainard says the PreCheck process is helping TSA move away from a “one size fits all” approach to transportation security. “The majority of airline passengers are low-risk and TSA PreCheck helps us strengthen security by enabling TSA to focus its security resources more aggressively on unknown and high-risk populations,” Brainard says.

TSA PreCheck was launched in October 2011. Members of frequent traveler programs and military personnel are among those who can enroll to use PreCheck each time they fly.

A few less well-traveled passengers will be selected at random for the TSA PreCheck. But they won’t know until the day of their flight, when they see a PreCheck logo on their boarding pass. “Right now, the goal is to get 25-percent of all travelers into the PreCheck, expedited screening option,” Brainard says.

The TSA does not have an estimate on how much time PreCheck saves the average passenger, but Brainard believes it’s significant. “Allowing passengers to leave their outer jackets on, to leave their shoes on, leave their laptops in the bags, and most importantly, leave their compliant liquids in their bags, saves a tremendous amount of time,” Brainard said.

Designated frequent flyers on American, Delta, United and U.S. Airways are eligible for the TSA PreCheck. Southwest Airlines is expected to join by the end of the year.