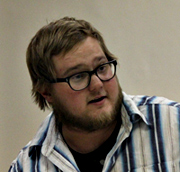 A new reward of $20,000 is now being offered for information about the disappearance of a north-central Iowa man. Ethan Kazmerzak, 22, of Hampton was last seen in the early morning hours of September 15 at a party in rural Franklin County.

Hampton mayor Shawn Dietz says there haven’t been many leads in the case, so anyone who spoke with Kazmerzak could offer help. “Any conversation, no matter how insignificant they think that conversation might have been…maybe he said something that might tip the authorities as to where he might have gone, a contact he may have had, or just anything really,” Dietz says.

Dietz says the circumstances surrounding the 22-year-old’s disappearance are unusual. “He’s somebody’s son, he’s somebody’s brother, so regardless of age…that’s why we’re looking for him,” Dietz said.

The new reward, offered by five anonymous donors, was announced at a press conference today. It is valid through December 2.

Authorities have said they do not believe Kazmerzak is still in Franklin County. Anyone with information is asked to contact the Hampton Police Department at 641-456-2529.