You are here: Home / News / Governor Perry would “certainly” campaign in Iowa sooner if he runs in 2016 (AUDIO) 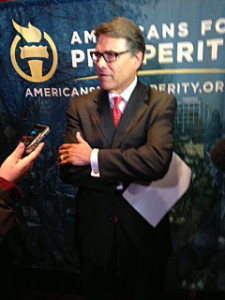 Texas Governor Rick Perry suggests if he runs for president again in 2016, he’ll take a different approach to campaigning in Iowa than he did in 2011.

“Since we were not successful, I would suggest there are some other things that we would do differently, but I have no idea what I’m going to do, so to theorize about how I would, what I would do differently is a bit premature,” Perry told reporters today.

After his fifth place finish in the 2012 Iowa Caucuses, Perry criticized Iowa’s “quirky” process and vowed to go on to campaign in other states where there were “real Republicans voting.” Perry jumped into the last presidential race by going to South Carolina to announce his candidacy — on the same day as the Iowa GOP’s Straw Poll in Ames. Perry suggests if he does run in 2016, he won’t wait until less than five months before the Iowa Caucuses to start campaigning in Iowa.

“That would certainly be one of the things I would do differently is come here,” Perry told reporters.

Perry is in Iowa today, meeting with Americans for Prosperity members in Des Moines over lunch before an evening speech at the Polk County Republican Party’s annual fall fundraiser.

Perry is the second Texas Republican in the past two weeks to visit in person with Iowa Republicans. Senator Ted Cruz — leader of the Republican effort in congress to “defund ObamaCare” — spoke at an Iowa GOP fundraiser in late October. Perry has called the federal government shutdown Cruz helped spark “nonsensical” and Perry today stressed that he wants to have a “civil discussion” with Americans about the work he and other Republicans are doing as governors.

“We should sit down as citizens and say, ‘You know, which one of these policies really put our citizens in the best position to take care of their families?'” Perry told reporters. “I happen to think it’s the red state policy, if you will, of having a tax structure that is as light as it can be on the job creators and a regulatory climate that is fair and predictable, a legal system that doesn’t allow for over-suing and that skilled workforce.”

Perry has been governor of Texas since December of 2000, taking over when George W. Bush left the governorship to occupy the White House. Perry announced this summer that he would not seek reelection in 2014.  Perry said in July that would “pray and reflect and work to determine his future path” — and that may include a second bid for the White House.