You are here: Home / Military / Governor says veterans have made “tremendous sacrifice” (audio)

The state’s annual Veterans Day ceremony was held today in Des Moines today. Iowa Governor Terry Branstad offered the keynote address. “Our military veterans have submitted a foundation of freedom and liberty that we continue to enjoy, and that all generations have enjoyed,” Branstad says.

Branstad, who is a veteran of the Army, says the day is one powerful reminder of the sacrifices veterans have made. “A couple of years ago my wife and I hand a chance to visit Normandy. And to see the crosses there and to think about the tremendous sacrifice that the  people made who were a part of that Normandy invasion,” Branstad says. “It’s just one of many, many, many times in our nation’s history that Iowans have accepted the call of duty and have served our country so honorably.” 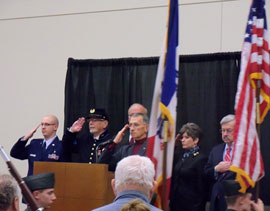 He says veterans of all ages share a common ideal. “The common thread among veterans is — whether they recently returned from serving in Iraq and Afghanistan, or whether they served in World War Two, or Korea, or Vietnam — they have a fundamental belief in freedom and opportunity, and the opportunity to extend that to other parts of the world,” Branstad says.

Branstad wrapped up his message with this thanks to veterans. “To all of the veterans with us today, please know that we the people of Iowa, respect and appreciate the service that you have provided, and the unbelievable sacrifice that you have made, the courage that you have shown,” Branstad says.