You are here: Home / Military / “Home Base Iowa” launched to lure retiring soldiers to the state (AUDIO) 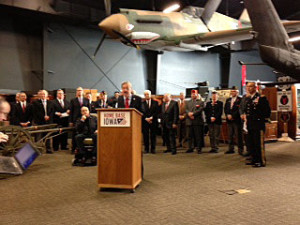 A new “Home Base Iowa” initiative has been launched to try to lure soldiers leaving the military to Iowa.  Governor Terry Branstad said the effort has “tremendous potential” to bring “tens of thousands” of new employees into the Iowa workforce.”These are the kinds of people that we want in Iowa,” Branstad said this morning during a news conference at the Iowa Gold Star Military Museum, “people who will make good neighbors, people who will coach our Little Leagues, who will be community leaders, who will be our hardworking colleagues and who will become part of the fabric of our state.”

Two Vietnam veterans — former Congressman Leonard Boswell and Casey’s General Stores CEO Bob Myers — are serving as co-chairs of the effort. Boswell said linking these new veterans with employment is key.”If they’ve got a job, so many problems just go away and that’s what it’s about,” Boswell said. “Let’s work together. Let’s make it happen.” 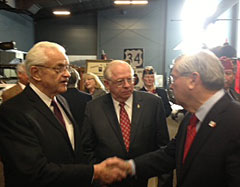 Myers said with a reduction in overseas combat assignments and deep cuts in the military budget, more and more soldiers will be entering the civilian workforce.”There’s a reason why many veterans don’t come back to Iowa, their home state,” Myers said. “They go to states that are more receptive to them and have state laws that demonstrate this and thus our greatest challenge and our top priority is to ensure that we’ve got friendly laws here in the state of Iowa.”

Myers said it’s time for the state to stop taxing military pension income and the governor says that’s a proposal he’s considering for the 2014 legislative session. Branstad hopes to raise $6 million from private sources to help finance the effort to link soldiers with jobs in Iowa.