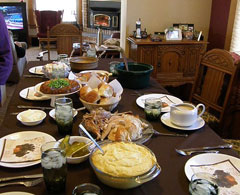 Iowans could be thankful for a smaller grocery bill as they prepare this year’s Thanksgiving feast. Dave Miller is the Iowa Farm Bureau’s Research Director. “The cost of a traditional Thanksgiving turkey dinner is likely to be down about 44-cents compared to a year ago,” Miller says.

The estimate is based on the American Farm Bureau Federation’s 28th annual informal price survey. It shows the average cost of a Thanksgiving turkey and the fixings for a family of 10 is $49.04. That’s down from $49.48 in 2012.

The biggest factor in the price decrease is the cost of a 16-pound turkey. “It’s the biggest cost of the meal and it’s down about 47-cents for the whole turkey at $1.36 per pound,” Miller says.

Turkey supplies are up this year compared to last, according to Miller, while the cost of producing turkeys is down. “You know, (the price of) corn is significantly lower than a year ago and all of that contributes to a slight reduction in the cost of turkeys,” Miller says. The American Farm Bureau Federation survey shopping list includes all of the traditional Thanksgiving meal favorites to feed a family of 10.

“It includes the turkey, bread stuffing, sweet potatoes, rolls with butter, peas, cranberries, a relish tray, pumpkin pie with whipped cream, and beverages of coffee and milk,” Miller says. At less than $5 per serving, Miller says this year’s Thanksgiving meal is a bargain. “In a world where prices seem to always go up, we find that occasionally, food prices do come down a little bit…something we ought to be thankful for,” Miller said.