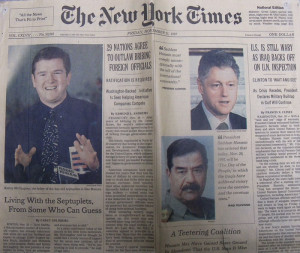 Iowa was in the spotlight of the world 16 years ago today as a woman from Carlisle gave birth to septuplets in a Des Moines hospital.

Bobbi McCaughey delivered Kenny, Alexis, Natalie, Kelsey, Nathan, Brandon and Joel. Paula Mahone was one of two doctors to perform the c-section for the babies who were nine weeks premature.

Mahone and the other medical staff got more attention than they had ever received a few hours after the birth in a news conference. She said their hours of preparation paid off. “I feel that we did and excellent job in being organized — it was not chaotic. Everyone in the room had a responsibility and they fulfilled that responsibility very well,” Mahone said.

The McCauheys were at the time the only set of septuplets to survive birth. “We were all very excited,” Mahone said, “and as we delivered each baby and saw how vigorous they were, we were all very, very happy.” Mahone said they knew they were going to make history with the delivery, but there was not a lot of tension in the room.

“It was wonderful, all the babies came out very vigorous as I said, that fact that it was calm in the room and organized. We thought about all of the aspects of the surgery — anticipated complications — it was wonderful,” she said. “It was an environment where everybody felt great about being there and helping this patient.”

Mahone said the circumstances of the birth were not unique, just the number of babies involved. “There aren’t septuplet pregnancies to go and read about and say ‘well what did they do?’ But, it’s not that dissimilar from other higher order pregnancies — it’s just that the risks are higher or greater. So, we knew what to anticipate,” Mahone explained.

Bobbi and her husband, Kenny McCaughey, have raised the septuplets out of the spotlight after the initial weeks and months of attention generated by their births. The seven are now sophomores in high school in Carlisle.