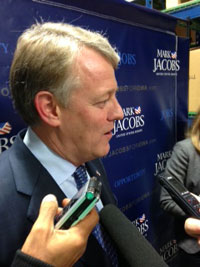 Mark Jacobs officially joined the Republican race for the U.S. Senate this morning, delivering a speech in the store-room of the Des Moines business his father started and his brother now runs.

“Jobs are my top priority,” Jacobs said. “In fact, you can’t spell ‘Jacobs’ without ‘jobs.'”

Jacobs, who is 51, is the retired CEO of a Texas-based energy company and he promised a crowd of supporters this morning that he would be a “different type” of senator.

“Our leaders in Washington are incapable of solving problems. You’re tired of being force-fed false choices such as having to pick between reforming health care or keeping the government open,” Jacobs said. “…The true choice we face is either electing another politician and expecting different results, or choosing someone with a business perspective who can build coalitions and enshrine our conservative principles into law.”

Jacobs said the health care industry can be reformed — and rising premium costs reduced — if competition is introduced in the market like it was in the telecom industry. Jacobs is calling for tax reform and an end to costly regulations, but he didn’t propose specific tax cuts or identify which regulations he’d eliminate.

“The days of perks for the fat cats and crumbs for our families are over,” Jacobs said.

The problem with Washington, D.C. is not a lack of ideas, he said, but a lack of results. Jacobs argued as a former CEO, he knows how to build coalitions to get things done.

“I will work with leaders of both parties to take on deficits and the debt crisis in America. I’ll set a new tone that brings people together,” Jacobs said. “We’ve had enough of the politics of division in this country. We need leadership by inclusion. After all, it’s not the Divided States of America, it’s the United States of America.”

Jacobs, after a career in Fortune 500 companies like Goldman Sachs, has the financial resources to bankroll his own campaign, but he’s not saying how much of his own money he’s willing to plow into the effort.

“My focus is going to be on raising money from others that share a concern about the dysfunction in Washington, D.C. and the problems we have there,” Jacobs told reporters this morning, “and they’d like a new generation of leaders to address the problems that we have.”

State Senator Joni Ernst, one of his opponents for the Republican Party’s U.S. Senate nomination, issued a statement welcoming Jacobs “to the Republican Party, to Iowa and now the race for United States Senate.” Those are pointed references to the financial support Jacobs gave to former Pennsylvania Senator Arlen Specter five months after Specter had switched to run as a Democrat as well as Jacobs’ out-of-state business career.

“You know, look, I’ve had the great benefit of growing up in this state,” Jacobs told reporters, “and it’s a great privilege for me to be in Iowa, giving back to the state that I love so much.”

Jacobs has now embarked on a 26-city tour of the state over the next six days to kick off his campaign.

Besides Ernst, Sam Clovis, Paul Lunde, Scott Schaben, Matt Whitaker and David Young have been campaigning for the Iowa GOP’s senate nomination this summer and fall.