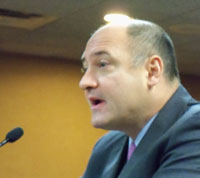 The Iowa Racing and Gaming Commission turned down another request today from the operators of the Sioux City riverboat casino to stop the construction of a land-based casino until lawsuits over the issue are decided.

Attorney Christopher Tayback represented Penn National Gaming, which runs the Belle of Sioux City, but lost out in an attempt to win a license for the land-based casino to a group called Sioux City Entertainment. Tayback asked the commission to suspend work on the new casino until the lawsuits the company has filed over the issue are settled. “Letting everyone proceed before they ‘re resolved, is the worst possible outcome. You put everybody involved…the Belle, the Argosy Casino and all its employees, SCE and it’s vendors, the city in an untenable position of uncertainty,” Tayback says.Tayback told the commission he doesn’t believe they are taking the concerns of Penn seriously. “There’s no urgency to get something done, there’s no deadline to get something done, and it is better to do it right, than to do it quickly,” Tayback says.

“They are operating, and conducting gambling games at the Argosy Casino, the Belle of Sioux City, they’re collecting revenue form that, they are paying the state, they are collecting the three percent that is necessary to go to their qualified sponsor organization. Their employees are working, the public can come to that riverboat and play gambling games as the law allows,” Lundquist says.

Lundquist says he feels the commission acted in the best public interest. “When faced with an unprecedented situation — where an existing operator and an existing sponsoring organization could not reach an agreement as to how to continue their relationship — this group had to step in, had to take action,” Lundquist says. “Ultimately decided you had to reopen the licensing process there in Woodbury County and an awarded a license to someone else, because of this unprecedented situation.”

Commission chair, Jeff Lamberti, made the motion to deny the request from Tayback based on what Lundquist told them. “I agree with his analysis of those factors, how they should apply in this particular case, and I do not believe that Belle has met the burden of justifying a stay of our actions in this matter,” Lamberti says. The commission unanimously denied the request.

The commission also later denied a request by Tayback to approve a new non-profit group that can accept the money withheld for that purpose.  The Racing and Gaming Commission decided to put the license for a land-based casino in Sioux City up for grabs after Penn and its then nonprofit partner, Missouri River Historical Development, could not agree on a contract.