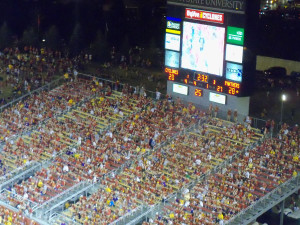 The south end of Jack Trice Stadium shown here in the season opener.

Iowa State officials announced plans to enclose the south end of Jack Trice Stadium. A lead gift of $25-million  from Roy and Bobbi Reiman has jump started plans according to athletic director Jamie Pollard. “Although we still need to seek approval from the Board of Regents and develop the final plans for this project, it is our desire to complete this project as soon as possible,” Pollard says. “We would like this project to be completed by the start of the fall 2015 football season.”

Pollard says they are not sure what the seating capacity of the stadium will be when the project is completed as he says they have some ideas, but still have to complete the plans. He says they want to maintain the environment in the stadium, not focus on the number of seats.Pollard says the gift means they can now put together a formal plan. “We have back of napkin plans, but we now need to go to the Board of Regents — get the formal approval – hire the architect, sit down with the construction folks and really start to map out our vision,” Pollard explains.

Pollard says the project will go to the Board of Regents in February, and they would have to start construction at the end of the next football season to get it done by 2015. Cyclone coach Paul Rhoads says it is great news for the football program. “Growing up in this state, growing up around Iowa State football and Iowa State University, if there is one thing the fans have always craved for, it’s bowling in that south endzone. They are going to get their wish,” Rhoads says.

Rhoads says it will help the Cyclones on the recruiting trail as he says they are always looking to show signs of construction when recruiting.