You are here: Home / Education / Math class at ISU teaches students to juggle 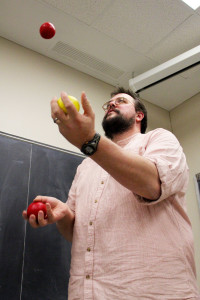 A new class offered at Iowa State University this semester is teaching students how to juggle.

It’s being taught by assistant professor of mathematics Steve Butler, who says there’s a lot more to juggling than just tossing an object from one hand to the other. “Juggling and mathematics…it’s a way to open up your eyes to see how many possibilities there are. It’s a way to explore patterns,” Butler says. “Mathematics is the science of patterns and juggling is the science of controlling patterns.”

Anyone can learn to juggle, according to Butler, but it takes a little patience and an understanding of those patterns. “You don’t have to be a great mathematician or a great juggler, you just have to be willing to be interested in both,” Butler says.

Applying math to the sport allows jugglers to explore the limits of what is possible, calculate the number of different patterns and find connections between patterns.

Butler says students can use a formula to figure out, for example, all the juggling patterns using four balls that repeat after five throws. In case you’re wondering – there are 2,101 such patterns. “I’d like students to say, ‘hey, this math stuff, you can do some interesting things with it…I can see the applications and ideas,'” Butler says.

By the end of the semester, Butler is hoping all of his students will be able to juggle three balls. But, ultimately it’s about the math. Butler says by exploring the properties of juggling sequences, students are learning skills they can apply to other areas of mathematics.