You are here: Home / Business / Online research, gift cards, increase in use for Christmas shopping 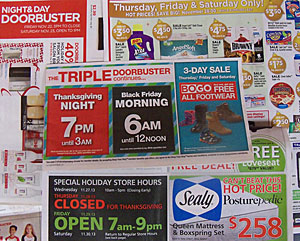 Retailers advertise special deals to try and lure in buyers as the holiday shopping season gets underway.

Some retailers are opening today, but most are waiting for the traditional Black Friday kickoff to the Christmas shopping season. Iowa State University retail specialist, Ron Prescott, says the weeks leading up to Christmas remain key for businesses. “About 20-percent of the total retail shopping is done during this quarter, and so it is kind of a make or break season for a lot of these retailers. And so it is extremely important,” Prescott says.

He’s reviewed all the economic forecasts for the season. “I’ve seen up to four percent increase in sales, 3.9, 3.7 — what we’re actually looking at here based on last year’s sales here in Iowa is probably about a 3.2 to 3.4 (percent) increase for the holiday season,” according to Prescott.

The internet has become a big part of the holiday season too, but not always for on-line purchases. “We see about 81-percent of are people are checking on-line. Not necessarily purchasing on-line, but at least researching on-line, and that’s a constant trend,” Prescott explains. “As well as shopping on-line, we’re seeing about 13 to 14-percent of shoppers are actually making their purchases on-line.”

Prescott says the big retail stores have an advantage in resources to advertise and show off the things that people are researching on-line. But, he says local stores can have the advantage by offering more personal service. “Now they may search on-line and then come back to a local store that is giving them better service and buy a particular product,” Prescott says. “And that’s really where that niche market, or that smaller retail store, that’s really where they shine.”

Electronic devices have become big sellers the last several years during the holidays, but Prescott isn’t seeing any star this time around. He says there are a lot of updates and changes but not a lot of new technology in the market as far as readers and notepads. “There’s really nothing that’s striking the consumer and saying ‘I really just have to have this,'” according to Prescott.

One thing that has changed on the shopping front is the idea that you don’t necessarily have to buy a gift — you can instead give someone a gift card to their favorite store and let them pick out what they want. “About 80-percent of all the consumers will probably purchase a prepaid card to give out this holiday season. And that has increased a great deal also,” Prescott says. He says new federal rules instituted a few years back that say gift cards can’t expire has made people more confident in buying them as gifts.