You are here: Home / Fires/Accidents/Disasters / Effort to refloat sunken towboat on the Mississippi continues 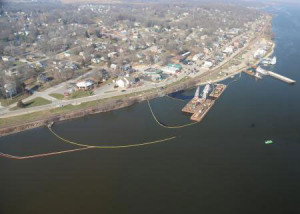 Booms and barges surround a sunken towboat near Le Claire.

A towboat that sank one week ago in the Mississippi River at LeClaire may soon be floating again. Coast Guard Petty Officer First Class, Mariana O’Leary, says several barges with large cranes arrived over the weekend, and divers began rigging slings around the towboat. A test “lift” on Sunday was successful and she says the back or stern of the vessel is now above the water several feet and they have started prepping the boat to get rid of the water.

That prepping involves several patches. “Underwater divers and above board now are making patches of holes in the vessel — including patching over doors and windows so that they can start pumping out the water that’s in it,” O’Leary says. The initial recovery involved putting booms around oil and fuel that had leaked out of the towboat and then sucking it out of the water.

O’Leary says the Coast Guard and other federal and state agencies will continue trying to recover fuel and oil from the water as the patching and work to raise the boat continues. “We still expect pockets of oil once we shift — start moving that vessel around — packets that are trapped under it start coming up,” O’Leary says. She says they have booms waiting around the boat to mop up any of the oil that floats up.

O’Leary says floating the ship may take up to one week.