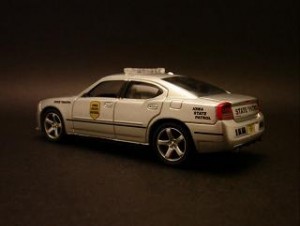 The Iowa State Highway Patrol’s gradual switch to more fuel efficient vehicles has led to a five percent reduction in the patrol’s fuel use in each of the last two years. Iowa Department of Public Safety commissioner Larry Noble says as the patrol’s Crown Victoria squad cars reach 120,000 miles, they’re being replaced with Dodge Chargers.”Then we’re also going to continue to look at other vehicles that may be efficient that we need in certain areas of the state,” Noble says.

The patrol is testing two Ford Explorers to judge not only gas mileage, but high-speed performance.

“We haven’t made any decisions on them, but we’re looking at them because they are all-wheel drive. They are six cylinders. We’re going to see how they are, if they’re as efficient. Sometimes you have to wait to see how they are in real-world conditions,” Noble says. “…The EPA rating may say one thing, but we drive that vehicle different than a lot of people would drive them, so we’re going to have to just look and see how they operate.”

“If someone’s running 80 miles an hour and you’re going 70 the other way, it takes a long time and you’re going to endanger other people’s lived by not having a high-performing vehicle, so we have to do that,” Noble says.

Crown Victorias and Chevrolet Impalas have been the preferred sedans in U.S. police agencies. Ford quit making the Crown Victoria in 2011.