You are here: Home / News / Branstad to tout ethanol in Virginia Thursday; subject not raised during Monday trip to Texas 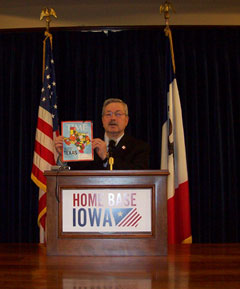 Iowa Governor Terry Branstad heads to Virginia later this week to testify at a public hearing over the U.S. Environmental Protection Agency’s decision to reduce the amount of ethanol fuel that must be produced in the U.S. in 2014.”I think the EPA is making a huge mistake,” Branstad said today during his weekly news conference.There are 42 ethanol plants in Iowa today, with two more facilities under construction that would use the whole corn plant — not just the corn kernels — to make ethanol. Branstad said the nation’s ag economy will take a huge hit if the federal government’s “Renewable Fuels Standard” for yearly ethanol production is reduced.

Branstad will testify Thursday morning at the EPA’s hearing in Arlington, Virginia soliciting comment about the Renewable Fuels Standard.

“I don’t believe that this administration really realizes the huge, negative impact that reducing the Renewable Fuels Standard could have on the economy here in the Midwest,” Branstad said today.

The oil industry argues with more fuel-efficient cars and very few gas pumps that dispense higher blends of ethanol fuel, a higher “Renewable Fuels Standard” would cause a glut of ethanol that cannot be used in the standard 10 percent ethanol blend of gasoline.  Livestock producers in places like Texas also complain the price of corn has been driven too high because of the demand from ethanol plants.

Branstad was in Texas Monday. Texas Governor Rick Perry — a critic of ethanol — hosted a fundraiser for Branstad’s 2014 campaign in Houston, home to thousands of oil industry companies, including ConocoPhillips — the world’s eighth largest oil company. Branstad today said that the subject of ethanol didn’t come up during his Texas visit and he did not refuse to take contributions from oil industry executives.

“I have never put those kind of restrictions on contributions,” Branstad said. “But I think people know where I stand.”

Branstad told reporters today he went to Houston to learn from Governor Perry and Branstad touted a Time magazine article about the economic boom times in Texas.