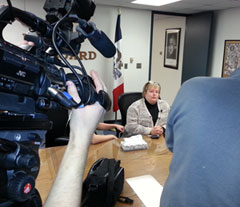 The Iowa Board of Parole today agreed to grant parole to an inmate who was sentenced to life in prison for first-degree murder at the age of 15. Kristina Fetters, who is now 33, was convicted in the 1995 death of her great aunt, Arlene Klehm, in Des Moines.

Fetters is dying of cancer. Most of the victim’s family has supported Fetters’ parole to a hospice facility. Her aunt, Darcy Olson of Des Moines, was the only person to speak at today’s parole board meeting. “No one can alter the past. It is what it is, this happened to our family and it’s now time for my family to have closure,” Olson said. “Kristina’s impending death cannot be denied and while there have been negative comments, we believe, as the victims, our family has suffered enough and we ask the parole board to grant our request.”

In September, doctors in Iowa City diagnosed Fetters with Stage 4 inoperable breast cancer. In November, a Polk County judge resentenced Fetters to a life sentence with the possibility for parole. Parole board member Doris Kelly of Waterloo called for Fetters’ parole, but only under the condition that she remain in a hospice facility.

“I do not see her as a public safety risk,” Kelly said. “The crime that she committed was a terrible crime, but she has been resentenced…so, I would be supportive of a parole to hospice only, with many conditions. In other words, she is not to leave hospice.”

Parole board member Thomas Phillips of Waukee supported Fetters’ parole as well, noting that the board could revisit the case if Fetters’ condition would improve.

“Should things change miraculously or whatever, the Board of Parole would reassess…so, I do not see this necessarily being the final vote that the board would take,” Phillips said.

In recent days, doctors have reported Fetters has shown some improvement, but Olson doubts Fetters will ever fully recover. “As someone who has lost a very important person in my life to cancer, I’ve seen people rally for just a short period of time and that’s what I think will happen in this case,” Olson said.

A spokesperson for the Iowa Department of Corrections said the board’s decision means Fetters will likely be paroled and sent to Hospice Care of Central Iowa within two weeks. Olson said Fetters’ mother and the rest of her family are relieved with the decision, but there’s little cause for celebration. “It’s just so bitter sweet,” Olson said. “This has been a 19 year old tragedy for my family. This will bring closure for my whole family and help us all cope just a little bit better with the situation. I’m grateful that my sister (Fetters’ mother) will be able to spend this time with her.”

Board of Parole Chairman Jason Carlstrom said only two letters were received from Iowans who were against Fetters’ parole. He said there were “quite a few” letters in support of her parole.

Audio: Parole Board discussion on Fetters. 16:43.