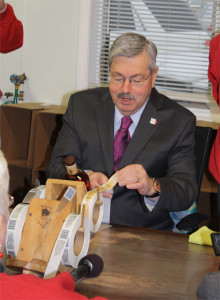 The end of prohibition was celebrated by over 50 people today in Templeton at the headquarters for Templeton Rye. Templeton Rye became a popular drink at speakeasies during prohibition and production was revived in 2003. During today’s celebration on the 80th anniversary of the repeal of prohibition, the one millionth bottle was labeled by Iowa Governor Terry Branstad.

The governor complimented co-founders Keith Kerkhoff and Scott Bush and the entire Carroll County community for Templeton Rye’s success. “The way the community has really pulled together and  supported these entrepreneurs and this industry, it’s pretty exciting what you have accomplished in eight years — starting from zero and going to one million bottles,” Branstad said. “I understand you are in about 40 states and will probably be in all 50 states in the near future.”

The granddaughter of Al Capone has been used to promote the prohibition era whiskey, and Branstad says the Templeton site has the potential to become are real tourist attraction for Iowa. “So there’s a lot of interest and intrigue about Templeton Rye, and about the history and lore,” Branstad said.

The bottle the governor labeled was put into a box with others and will be shipped off to the state liquor warehouse for distribution. The person who eventually buys the bottle will win a prize based on the code on the bottle’s special label. 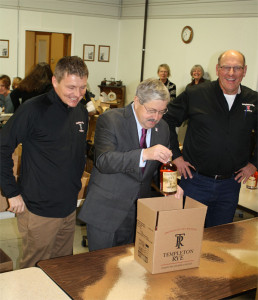 Co-founder Scott Bush said they debated for a while on what to do with the bottle. “We were going to put it up in the distillery, we were going to may put it in the historic museum. A lot of times we thought about drinking it,” Bush said, drawing a laugh from the crowd.

They ultimately decided to let someone in Iowa buy it.

“As early as a year and a half ago we were still only in four states, so even though Templeton is starting to be a big thing across the country, the vast majority of our support is still right here in the state,” according to Bush. “So, we thought it was the right thing to do to release the bottle in the state. But we also thought that it would just be a fun thing to do.”

They also announced the first code number today as the number five.  One number will be announced each week.  The entire sequence of numbers will be announced on January 17, on what would be 115 years to the day when Al Capone was born. The person who finds the bottle will receive a tour and tasting at the headquarters in Templeton.