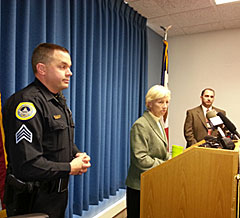 Des Moines Police say they may never know what prompted a man to fire a semi-automatic rifle outside his home Wednesday on the city’s south side. Thirty-eight-year-old Steven Vogel fired roughly 100 rounds, hitting seven houses and three vehicles. He also fired at responding officers before those officers shot and killed Vogel.

Des Moines Police Chief Judy Bradshaw says the incident could’ve easily resulted in multiple fatalities. “The call yesterday is probably the worst nightmare that a patrol officer can be dispatched on,” Bradshaw said. “We’re very fortunate that it played out the way that it did. It had the potential to be a horrific scene.”

The two officers who returned fire were Lieutenant David Seybert, a 23-year department veteran, and Officer Zachary McCarthy, who has been with Des Moines police one year. It’s unclear which officer fired the fatal shot. Vogel was shot in the head and died at a Des Moines hospital.

Des Moines Police Major Steve Waymire said Vogel started firing shots at 3:20 p.m., which is usually the time students are getting out of nearby schools. “Yesterday was an early out day. The vicinity of this house is near two schools, so it could’ve been much worse,” Waymire said. “We’ve confirmed over 80 rounds fired and we expect that to be in excess of 100. You can imagine the potential danger we would have had if two schools had been letting out at the same time.”

Vogel’s criminal history includes charges of assault, harassment, and interference with official acts. Waymire said it remains unclear why Vogel was firing the rifle outside. “There was no indication of an altercation, we have not found a motive yet,” Waymire said. “We’re looking into that as we get into the home. There may be information there.”

Des Moines Police Sergeant Jason Halifax said only one person was shot by Vogel, a motorist, 75-year-old Larry Chiles. “He indicated to us that when he was driving by, he witnessed the suspect drop to knee, aim at him and fire the weapon,” Halifax said. “He was struck in the head. It was non-fatal.” Halifax said Chiles is expected to make a full recovery.

Vogel did not have permits to carry or purchase firearms. In addition to the semi-automatic rifle, Halifax said Vogel was in possession of a handgun.