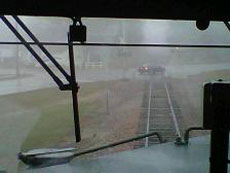 Car caught trying to beat train across the tracks.

Iowa motorists are being reminded how to conduct themselves at railroad crossings and some are getting reminded with citations. Mason City police officers rode along on a Union Pacific train on Wednesday to see misbehaving motorists firsthand at crossings. Dirk Peterson, manager of operating practices for the U-P, says it’s still a big issue with people going through crossings as trains approach.

Peterson organized the ride-along to educate law officers and the public. “It helps get the message out that it is absolutely imperative that the public stops and heeds the warning that is provided at the railroad crossing,” Peterson says, whether it’s to yield and look both ways or to come to a complete stop, because they don’t want to see more collisions at crossings.

Peterson says the dense fog Iowans have experienced the last few days is also a time when people need to use extra caution around railroad crossings, especially those that do not have electronic signals. He says there might be times where a train is stopped on a crossing, so if people aren’t in the habit of stopping or yielding at those crossings, it’s a good possibility they might strike the side of a train.

Peterson says people need to remember a flashing red light at a crossing means people need to stop, even if a train is not visible. By law, flashing red lights at a railroad crossing mean the motorist is required to come to a complete stop, and if it’s safe, then to cross. “If they can see that train approaching and they can hear that whistle blowing, it’s not a safe time to cross,” he says. “It’s very difficult to judge the speed of a train. That headlight is very deceiving. It’s hard to tell if that train’s going ten miles an hour or 50 miles an hour.”

According to statistics from the Federal Railroad Administration for calendar year 2012, Iowa ranked 15th in the nation in total highway-rail grade crossing fatalities. California ranked first on that list, with neighboring states Illinois ranking third, Missouri sixth and Minnesota ninth.