You are here: Home / Crime / Courts / Over 50 birds found in home of Des Moines shooter killed by police 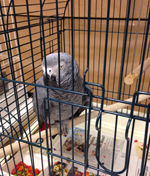 Dozens of exotic birds and other animals are being removed from a home at the center of a crime scene in Des Moines. Police say a man opened fire on Wednesday afternoon, shooting seven neighbor’s houses and three vehicles — and then fired on arriving officers who returned fire and killed him.

The gunman’s home was filled with creatures, according to Josh Colvin, operations manager of the Animal Rescue League of Iowa. “We have 55 birds, various exotic birds, and four cats and one snake,” Colvin says. The rescue league is taking custody of the 60 animals and also removed two dead birds. For the most part, Colvin says, the animals were in good condition and good health.

In particular, the four-dozen-plus birds were of many varieties. “We’ve got everything from cockatoos to some amazons and many other exotic birds,” he says. Colvin could not estimate the value of the collection of birds, but indicated it would surely be significant and that it would take a lot of work for an individual to care for that many pets. 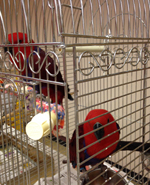 Fifty-five birds were found in the home of a man involved in a shooting in Des Moines.

Since the home’s owner, 38-year-old Steven Vogel, was shot and killed during the incident, the animals will be under the rescue league’s care, for now. “We’re working with the police department and holding on to them until we can figure out what’s going to happen next,” Colvin says. “It happened all at once so we’re just trying to absorb and make sure that we’re taking care of the animals.”

Legal issues need to be resolved, Colvin says, as the birds may actually go to relatives of the man who was killed — or they may be put up for adoption.

“Probably either one or the other,” Colvin says. “We’re waiting to see if that is a possibility, next of kin, if not, then we hold onto them until we’re notified by the police department, then we give them up for adoption and find homes for these guys.”

Caring for this many exotic birds is costly. The rescue league is asking for the public to help by making a monetary donation to cover the veterinary expenses and food needed to care for the influx of 60 more animals, straining the already-full shelter.

Donations can be made at ARL-Iowa.org/donate.